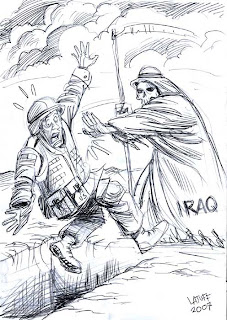 "You are nearly my namesake – having a Romanized version of my Hellenized name (Petraeus/Petras). You are dubbed a ‘warrior’ or ‘counter-insurgency intellectual’. I hold credentials as an ‘insurgency intellectual’ or as Alex Cockburn calls it ‘a fifty-year membership in the class struggle’. You publicists have billed you as ‘America’s last best hope for salvation (of the empire) in Iraq.’ Predictably the Democrats in Congress led by Senator Clinton went down to their knees in praise and support of your professionalism and war record in Northern Iraq. So let it be recognized that you enjoy an advantage: the support of both parties, the White House, Congress and the mass media, but still being an insurgent intellectual, I am not convinced that you will or should succeed in saving Iraq for the empire. Better still; I think you undoubtedly will fail, because your military assumptions and strategies are based on fundamentally flawed political analyses, which have profound military consequences.......

By ‘honest talk’, about troop numbers in the present tense for your war, you prepare the ground for a greater escalation in the proximate future. “Right now we do not see other requests (for troops) looming out there. That’s not to say that some emerging mission or emerging task will not require that, and if it does then we will ask for that (my emphasis)” (AlJazeera, 3/8/2006). First there’s a ‘surge’ then there is an ‘emerging mission’ and before we know it, there are another fifty thousand troops on the ground and in the meat-grinder that is Iraq. Yes, General, you are a fine master of ‘double speak’ – but beyond that you are, with your colleagues in the White House and Congress, doomed to go down the same road of political-military defeat as your predecessors in Indo-China. Your military police will jail thousands of civilians and perhaps many more. They will be interrogated, tortured and perhaps some will be ‘broken’. But many more will take their place. Your policy of security through intimidation will ‘hold’ only as long as the armored cars in each neighborhood point their cannons at every building. But how long can you sustain it? As soon as you move, the insurgents will return: they can continue for months and years because they live and work there. You can’t. You run a costly colonial army, which suffers endless casualties. Sooner or later, the folks back home will force you to leave.

Your ambitions, General Petraeus, exceed your abilities. Best start preparing your farewell to arms and look toward a higher post in Washington. Remember your chances are slim: Only winning generals or draft dodgers are elected President. There is always a professorship at the Kennedy School at Harvard for the ‘warrior intellectual’ who is good at the books but a failure in the field."
Posted by Tony at 8:01 AM