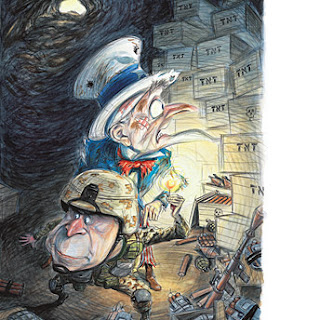 A panel of experts convened by Rolling Stone agree that the war in Iraq is lost. The only question now is: How bad will the coming explosion be?

"The war in Iraq isn't over yet, but -- surge or no surge -- the United States has already lost. That's the grim consensus of a panel of experts assembled by Rolling Stone to assess the future of Iraq. "Even if we had a million men to go in, it's too late now," says retired four-star Gen. Tony McPeak, who served on the Joint Chiefs of Staff during the Gulf War. "Humpty Dumpty can't be put back together again."

Those on the panel -- including diplomats, counterterror analysts and a former top military commander -- agree that President Bush's attempt to secure Baghdad will only succeed in dragging out the conflict, creating something far beyond any Vietnam-style "quagmire." The surge won't bring an end to the sectarian cleansing that has ravaged Iraq.......

How bad will things get in Iraq -- and what price will the world ultimately pay for the president's decision to prolong the war? To answer those questions, we asked our panel to sketch out three distinct scenarios for Iraq: the best we can hope for, the most likely outcome and the worst that could happen.

Richard Clarke
Counterterrorism czar from 1992 to 2003

Nir Rosen
Author of In the Belly of the Green Bird, about Iraq?s spiral into civil war, speaking from Cairo, where he has been interviewing Iraqi refugees

Gen. Tony McPeak (retired)
Member of the Joint Chiefs of Staff during the Gulf War