SYMPATHY FROM ONE WAR CRIMINAL TO ANOTHER 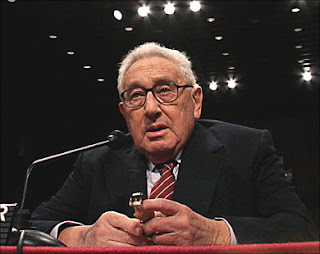 "TOKYO: Former US Secretary of State Henry Kissinger said yesterday the problems in Iraq were more complex than the Vietnam War and that military victory was no longer possible.

Dr Kissinger, who helped engineer the US withdrawal from Vietnam, said he sympathised with the troubles facing US President George W. Bush.
"A military victory in the sense of total control over the whole territory, imposed on the entire population, isn't possible," he said.

The faceless, ubiquitous nature of Iraq's insurgency, as well as the religious divide between Shia and Sunni rivals, made negotiating peace more complex, he said.

"It is a more complicated problem," Dr Kissinger said. "The Vietnam War involved states, and you could negotiate with leaders who controlled a defined area."

An architect of the Vietnam War who has also advised Mr Bush on Iraq, he warned that a sudden pullout of US troops or loss of influence could unleash chaos.