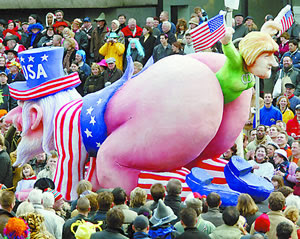 "Bethlehem - Ma'an - Palestinian high-ranking sources expressed disappointment with the visit of German Chancellor Angela Merkel, who Forbes Magazine considers to be the world's most powerful woman.

The sources told Ma'an that "Merkel lacked all elements of common decency and respect; she was not polite as a high-ranking official like her should be and failed to observe basic codes of conduct."

They said that she did "everything possible to provoke the Palestinian people and underestimated the suffering of these people, but was the opposite on the Israeli side that is occupying the land and oppressing the Palestinians."

The sources said that the German chancellor was "interested only in the case of the Israeli soldier Gilad Shalit but she did not say a word about 12,000 Palestinian prisoners including women, children, old people and sick people, in Israeli jails."

The sources stated that the discrimination was obvious in her visit from the very beginning. "She refused to meet Abbas in Bethlehem to see the separation wall, which causes endless suffering to Palestinians, claiming that she might be reminded of the Berlin wall, which she observed daily when working in East Berlin."

The sources also said that Merkel refused to meet the representatives of the Christian Church in the Bethlehem. "She refused, even during Easter to witness the Israeli measures of restriction on Christians, banning them from entering the holy city of Bethlehem, which is surrounded by the separation wall."

The sources added that she also cancelled a meeting with the representatives of the Palestinians Non-Government Organisation's, such meetings have become convention the foreign diplomats and officials visiting the PA territories. Merkel did not give any reason for the cancellation.

With regard to her meeting with Palestinian president Mahmoud Abbas, the sources said that she "concentrated only on the issue of Shalit and did not pay much attention to the issue of peace process or the Israeli measures on the ground, which make the lives of Palestinians unbearable."

The sources expressed deep disappointment because she received a doctorate degree from the Hebrew university in Jerusalem but refused to visit the city. "She refused to meet with its citizens and to see the kind of lives they are living and the way the Israelis are transforming the city and destroying its Arabian landmarks in violation of international legitimacy and resolutions."

The result of the visit of Merkel, according to the sources, "raises the question about the impact of a biased Germany policy, how can such a policy play a role in reviving the peace process and how can Merkel be a fair party?"

Finally, the sources asked whether "the Palestinian people have to pay the price for the suffering of the Jews and the crimes committed against them?""
Posted by Tony at 4:58 AM