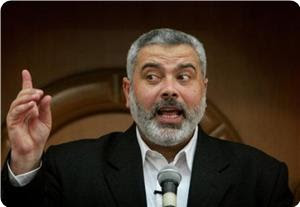 "GAZA, (PIC)-- Ismail Haneyya, the PA premier, has described the western-led siege imposed on the Palestinian people as "unethical" and "futile", while charging the US administration with igniting tension in the region.

Haneyya told the Friday congregation in Breij refugee camp in central Gaza that the previous Hamas-formed government was under siege for a year to force it offer political concessions but to no avail.

He pointed out that international changes occurred regarding this siege, noting that a number of countries wished to accelerate political and financial relations with the PA while others declared they would not deal with the Hamas ministers in the new PA unity government, which he said is "unacceptable".

The premier accused the US administration with igniting tension in the region through refusing to lift the economic embargo on the PA government, which prevented local, regional and international banks from transferring funds directly to the government."

Amazing! Such penetrating wisdom. With "leaders" like him the Palestinians will be in the wilderness for the next forty years, at least.
Posted by Tony at 6:38 AM