'A dead Iraqi is just another dead Iraqi... You know, so what?' 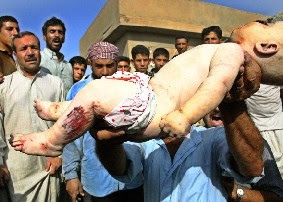 A Good Article
The Independent

"It is an axiom of American political life that the actions of the US military are beyond criticism. Democrats and Republicans praise the men and women in uniform at every turn. Apart from the odd bad apple at Abu Ghraib, the US military in Iraq is deemed to be doing a heroic job under trying circumstances.

That perception will take a severe knock today with the publication in The Nation magazine of a series of in-depth interviews with 50 combat veterans of the Iraq war from across the US. In the interviews, veterans have described acts of violence in which US forces have abused or killed Iraqi men, women and children with impunity.

The report steers clear of widely reported atrocities, such as the massacre in Haditha in 2005, but instead unearths a pattern of human rights abuses. "It's not individual atrocity," Specialist Garett Reppenhagen, a sniper from the 263rd Armour Battalion, said. "It's the fact that the entire war is an atrocity."......

Through a combination of gung-ho recklessness and criminal behaviour born of panic, a narrative emerges of an army that frequently commits acts of cold-blooded violence. A number of interviewees revealed that the military will attempt to frame innocent bystanders as insurgents, often after panicked American troops have fired into groups of unarmed Iraqis. The veterans said the troops involved would round up any survivors and accuse them of being in the resistance while planting Kalashnikov AK47 rifles beside corpses to make it appear that they had died in combat......

The worst abuses seem to have been during raids on private homes when soldiers were hunting insurgents. Thousands of such raids have taken place, usually at dead of night. The veterans point out that most are futile and serve only to terrify the civilians, while generating sympathy for the resistance......"
Posted by Tony at 4:27 AM