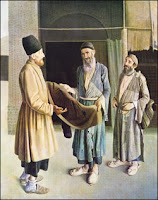 "Iran's Jews have given the country a loyalty pledge in the face of cash offers aimed at encouraging them to move to Israel, the arch-enemy of its Islamic rulers.
The incentives - ranging from £5,000 a person to £30,000 for families - were offered from a special fund established by wealthy expatriate Jews in an effort to prompt a mass migration to Israel among Iran's 25,000-strong Jewish community. The offers were made with Israel's official blessing and were additional to the usual state packages it provides to Jews emigrating from the diaspora.

Iran's sole Jewish MP, Morris Motamed, said the offers were insulting and put the country's Jews under pressure to prove their loyalty. "It suggests the Iranian Jew can be encouraged to emigrate by money," he said. "Iran's Jews have always been free to emigrate and three-quarters of them did so after the revolution but 70% of those went to America, not Israel."....."

I know, they came to live in Beverly Hills, California; one of the most expensive and exclusive cities.
Posted by Tony at 4:30 AM