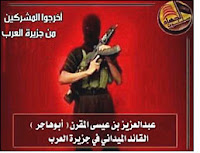 ".....the latest target, as the previous target, Iraq, is mired in engineered “sectarian violence,” and other targets, such as Syria, await their turn—has supposedly fallen afoul of “al-Qaeda in Iraq,” as the corporate media reports. “The leader of an al-Qaida umbrella group in Iraq threatened to wage war against Iran unless it stops supporting Shi’ites in Iraq within two months, according to an audiotape,” the Associated Press would have us believe, mostly because we are suckers for these sort of things......

Finally, CIA asset Mahmoud Abbas “said on Monday the Palestinian Islamist movement Hamas is protecting al Qaeda and allowing it to gain a foothold in Gaza,” Reuters reports. “It is Hamas that is protecting al Qaeda, and through its bloody behavior Hamas has become very close to al Qaeda,” said Abbas, blaming the phantom organization, or database. “That is why Gaza is in danger and needs help.”

Actually, Gaza is threatened by Israel, currently engaged in a blockade “threatening to destroy the territory’s commercial sector and drive more people into the hands of extremists,” that it to say those resisting occupation. “In the last three weeks, 75 per cent of Gaza’s factories have closed because they are not allowed to import raw material or export finished products, forcing thousands of families to rely on food aid to survive,” notes Gisha, an Israeli human rights organization. “In reality, a policy of collective punishment is being imposed upon 1.4 million people, in violation of international humanitarian law and contradictory to Israel’s interest. Destroying Gaza’s economy only exacerbates dependence on extreme elements.”

Abbas, following his CIA script, signed off on by Olmert, is oblivious to all of this.

But never mind. We have an “al-Qaeda” epidemic just about everywhere, even Gaza. "
Posted by Tony at 7:10 PM