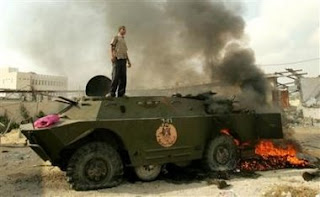 "Bethlehem - Ma'an - Palestinian President Mahmoud Abbas is expected to negotiate with Israeli Prime Minster Ehud Olmert on the latter's approval of allowing the Palestinian Badr Division of the Jordan Army into the West Bank to help bolster Abbas's position.

According to Ynet news, the Palestinian leader is also expected to request the entry of "dozens" of armored vehicles from Egypt into the West Bank.

The two leaders will likely discuss the matter during their meeting in Jerusalem on Monday.

Prior to the Hamas takeover in the Gaza Strip, Abbas also made the request concerning the Badr Division, but then they were to be deployed in the Gaza Strip. Now, they are likely to be used to bolster the president's control over the West Bank.

Ynet says that it is unclear if Olmert will consent, as a similar request by Abbas has been refused before.

Olmert and Abbas will also discuss on Monday the list of 250 Fatah members whom Israel may release from prison. Olmert is expected to officially inform Abbas on the transfer of $120 million of withheld Palestinian tax revenues, and Israel's guarantee not to hold back any Palestinian tax money in the future.

Israeli opposition leader Binyamin Netanyahu has declared that he supports the initiative to bring Palestinian troops from Jordan into the West Bank, as well as Egyptian armored vehicles. Ynet quoted Netanyahu, who, during a visit to Washington last month, told Israeli reporters that Israel cannot "build on Palestinian President Abbas with Palestinian forces alone. We need Egyptian and Jordanian involvement." "

This is the definition of a stooge: he can't trust or count on his people; he needs ouside forces to prop him up.
Posted by Tony at 12:14 PM