When will these gullible Arabs understand? 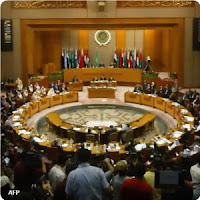 When will these gullible Arabs understand?

by Khalid Amayreh in East-Jerusalem

"The decision of the Arab League to dispatch a delegation to Israel to discuss the already moribund Arab Peace initiative can only be interpreted as another exercise in futility, gullibility and impotence.

First of all, Israel itself is utterly uninterested in any genuine peace process that would end the Israeli occupation of Palestine and bring about a just resolution of the Palestinian refugee plight.

Indeed, a country that has built hundreds of Jewish-only colonies on stolen land, and is now mutilating the West Bank with a hateful, gigantic wall that is reducing Palestinian population centers to open-air concentration camps, is obviously not interested in peace and reconciliation, neither with the Palestinian people nor with the Arab and Muslim nations.......

In the final analysis, the Arabs are acting as beggars, and beggars, as we all know, can’t be choosers.

Only when the Arab and Muslim states in the Middle East possess a strategic force, will Israel start thinking about peace."
Posted by Tony at 5:24 AM