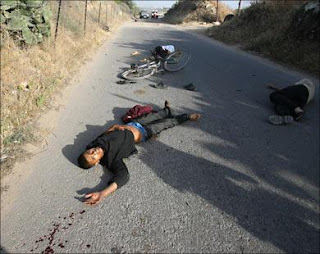 "The Israeli government should immediately order a full and independent investigation into yesterday’s killings of Palestinian civilians by Israeli forces in the Gaza Strip, Amnesty International said today.

“Yesterday’s strikes, which the Israeli army launched after the killing of its soldiers in combat, appear to have been carried out with disregard for civilian life,” said Amnesty International. “There seems to be a culture of impunity within the Israeli forces which is contributing to routine use of reckless and disproportionate force.”

At least 18 Palestinians, including children and other unarmed civilians, were killed. More than 30 others were injured in attacks by Israeli planes and by ground forces using tanks in the Gaza Strip yesterday. Three Israeli soldiers were killed in confrontation with Palestinian militants during an Israeli army attack within the Gaza Strip.

Those killed included Reuters cameraman Fadel Shana, who was struck by fire from an Israeli tank which he was filming. He had travelled to the scene in a car clearly marked “TV-Press”. He was killed as he started to film the tank.

“Fadel Shana appears to have been killed deliberately although he was a civilian taking no part in attacks on Israel’s forces,” said Amnesty International......"
Posted by Tony at 9:12 PM