No Peace Without Hamas 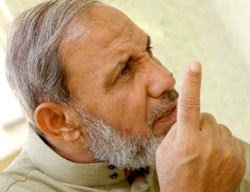 "GAZA -- President Jimmy Carter's sensible plan to visit the Hamas leadership this week brings honesty and pragmatism to the Middle East while underscoring the fact that American policy has reached its dead end. Secretary of State Condoleezza Rice acts as if a few alterations here and there would make the hideous straitjacket of apartheid fit better. While Rice persuades Israeli occupation forces to cut a few dozen meaningless roadblocks from among the more than 500 West Bank control points, these forces simultaneously choke off fuel supplies to Gaza; blockade its 1.5 million people; approve illegal housing projects on West Bank land; and attack Gaza City with F-16s, killing men, women and children. Sadly, this is "business as usual" for the Palestinians.
Last week's attack on the Nahal Oz fuel depot should not surprise critics in the West. Palestinians are fighting a total war waged on us by a nation that mobilizes against our people with every means at its disposal -- from its high-tech military to its economic stranglehold, from its falsified history to its judiciary that "legalizes" the infrastructure of apartheid. Resistance remains our only option. Sixty-five years ago, the courageous Jews of the Warsaw ghetto rose in defense of their people. We Gazans, living in the world's largest open-air prison, can do no less. ........"
Posted by Tony at 5:52 AM