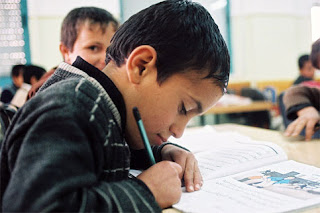 "HEBRON, 14 April (IRIN) - A Palestinian charity in the West Bank city of Hebron is concerned it will be shut by the Israeli military and forced to close its orphanages and schools, employees at the institution told IRIN.

The Israeli military has ordered the closure of buildings rented by the Islamic Charitable Society (ICS), saying it is working for Hamas.

"At first we thought maybe they were just taking the business side of the charity, but now, after we appealed to the Israeli high court, our lawyer realized the orders mean they really want to close everything, including the schools and orphanages," said Rashid Rashid from the ICS.

Some 240 boys and girls aged 5-18 live at the orphanages, while thousands of other children, many of whom have lost at least one parent, receive schooling, food and clothing from the charity.

The ICS has received support from both the Christian Peacemaker Teams in Hebron and the Israeli Rabbis for Human Rights......"
Posted by Tony at 6:39 AM