Hamas: Gaza explosion is imminent if siege not lifted soon 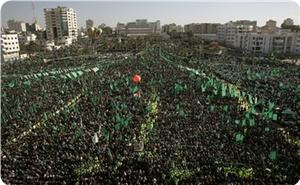 "GAZA, (PIC)-- Hamas Movement has made it clear and sound on Thursday that neither she nor the Palestinian people would accept the crushing Israeli siege on Gaza Strip to continue longer; warning all concerned parties that the zero hour for the popular explosion in Gaza was fast approaching.

In a statement it issued in this regard, Hamas called on the Arab rulers to stop mortgaging themselves [to foreign parties], and to immediately stand up in support of the besieged Palestinian people in Gaza.

"There is no excuse for the Egyptian leadership and the Arab rulers in retaining the Rafah crossing point sealed off", the Movement asserted in the statement, urging Arab and Muslim peoples around the world to go on massive demonstrations against the siege, and in support of the Palestinian people.

The Movement also underlined that the Israeli threats of disabling the Movement, and of targeting its senior political and military leaders don’t shake it, emphasizing that the Israeli occupation government will never succeed in subjugating the Palestinian people to its will despite the pain it inflicts on them.

"The vicious, criminal, and ugly Israeli aggression against our Palestinian people continues with the aim to subdue them and to push them into accepting its dictates to abandon our national constants and to compromise our legal rights", the Movement underscores, highlighting that the latest IOF carnage in Gaza city was part of that Israeli scheme.

More than 20 Palestinians, including children, women, and a journalist among others were murdered in the IOF troops' onslaught on the area on Wednesday.

Finally, the Movement marked that the ongoing IOF atrocities in Gaza Strip were committed in parallel with the wing-clipping Israeli economic sanctions imposed on Gaza Strip since June of last year; vowing "not to allow such condition to continue"."
Posted by Tony at 5:56 AM