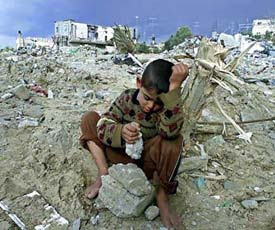 "The fate of hundreds of orphans is in the balance after Israel's army attacked their schools and residence. Israel has of late been waging a dirty war against established Islamic institutions in this southern West Bank town of nearly 200,000, the largest in the West Bank, Hebron.

Under the rubric of fighting Hamas, Israeli troops and agents of the Shin Bet, Israel's notorious domestic security agency, have been raiding and vandalising charities, orphanages, boarding schools and affiliated businesses.

The unprecedented campaign began mid-February when Israeli troops stormed two orphanages run by the Islamic Charitable Society (ISC), one of the oldest charities in Palestine, and the local Muslim Youth Association building. Having thoroughly terrorised hundreds of sleeping children, the soldiers moved to one building after the other, confiscating furniture, smashing glass, looting valuable items and leaving a trail of destruction.......

Earlier this week, a representative of the Palestinian Interior Minister summoned an official from the Muslim Youth Association to propose a "deal" whereby Israel would cancel the closure and confiscation in exchange for the ISC administration agreeing to place the entire association under the authority of the PA Waqf (Religious Endowments) Ministry.

The Muslim Youth Association official dismissed the proposed deal as a "cheap conspiracy", arguing that the charitable institutions targeted by Israel were licensed and regularly overseen by the PA's interior and education ministries. One charity official intimated that donors in general don't trust the PA and wouldn't donate money to institutions run by Fatah operatives.

"If they [the PA] take over the ISC, the society will collapse in a few months. This is why we would prefer that the Israelis close it down rather than see Fatah run it."

PA officials in Hebron dismissed "these strange charges" as "fictional". Hussein Al-Araj, Hebron's PA-appointed governor, said the Palestinian government was trying to solve the problem quietly and away from the media."
Posted by Tony at 5:31 AM