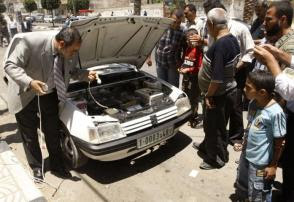 "......But then Mr Annan is proudly trying to make a point that, while it might be electric, this Peugeot is no milkfloat. "It can do 100kph (62mph)," he says with a grin, as our knuckles whiten in the passenger seats. Whether or not Mr Annan's friend Hesham Abu Sido, an electrical consultant, is justified in describing the electric vehicle as a "genius idea" which is "the most fantastic thing that has happened in Gaza", it is certainly a case of turning adversity into opportunity.

It also proves that Gaza's famous entrepreneurial spirit has not yet been snuffed out by the draconian economic blockade imposed by Israel after the Palestinian militant group Hamas seized full control of the Strip by force a year ago tomorrow.

Since then, Gaza has seen continuing conflict, ever-deepening poverty, shortages, unemployment and despair. Against that background, the white Peugeot has become a symbol of Gaza's suppressed potential......."
Posted by Tony at 4:51 AM