A village in its death throes 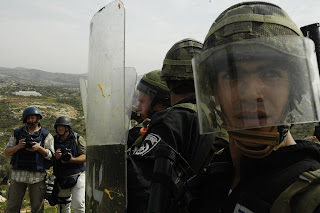 "......In the meantime, Hindi, one of his sons, has taken it upon himself to help organise the protests against the wall's erection. Breathless and bathed in sweat, he returned to the house enraged by what he'd seen. A freelance photographer and camera operator by trade, he had plenty of evidence of the scale of the injustices being dealt to his fellow villagers. He showed us footage of a border police officer letting off rapid-fire bursts of rubber bullets in random directions, as well as clips of the wounded being rushed away from the scene by panicked medics.
Hindi is just as resigned to the reality as his father: "At least by protesting we can try to prevent them taking even more of our land, but we [are in no doubt] that the wall will still be built." All that the locals can do is keep placing themselves in the firing line, in the vain hope that their actions will do more good in the long run than the harm caused by the tear gas and rubber-coated missiles fired into their bodies.
In Nilin specifically as well as in the West Bank as a whole, one thing is certain: the drugs don't work. The idea of international intervention is laughed at sorrowfully by Khaled and his peers. Similarly, the aid of the Israeli courts: "An Israeli judge banned them from continuing to build the wall here," said Khaled, "but they [the army] couldn't care less. They're still here — and if the courts can't stop them, who can?"
The answer — as he, his son and the rest of the villagers know all too well — is that no one can. The eyes of the world look on either benevolently (in the case of Israel's backers in the US and elsewhere), or impotently; too cowed to act, too diplomatic to intervene. Time is not on the Palestinians' side. Just as Nilin appears in its death throes today, so too will another village tomorrow, then another, then another. As the life of the Palestinian nation ebbs away, the best treatment on offer is merely palliative; and even that is proving too weak to soothe their never-ending anguish."
Posted by Tony at 4:30 AM