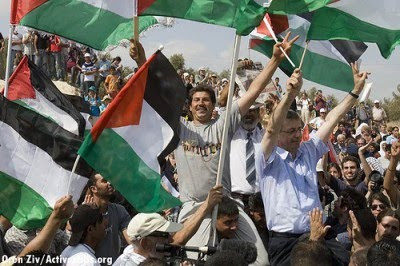 (Left: Adeeb Abu Rahme (in grey) at a Bil'in demonstration)

"......Targeted night arrests of community leaders have become common practice across the West Bank, most notably in the village of Bil'in where, since June, 31 residents have been arrested for their involvement in the demonstrations against the wall. Among these is Adeeb Abu Rahmah, a prominent activist who has been held in detention for almost five months and is under threat of being imprisoned for up to 14 months.

Clearly, the strategy is to arrest all of the leaders and charge them with incitement, thus setting an extremely high "price tag" for organising protests against the subjugation of the Palestinian people. The objective is to put an end to the pro-peace popular resistance in the villages and to crush, once and for all, the Palestinian peace movement.

Thus, my answer to those who ask about a Palestinian "Peace Now" is that a peaceful grassroots movement has always existed. At Abdallah Abu Rahmah's trial next Tuesday one will be able to witness some of the legal methods that have consistently been deployed to destroy it."
Posted by Tony at 4:03 AM