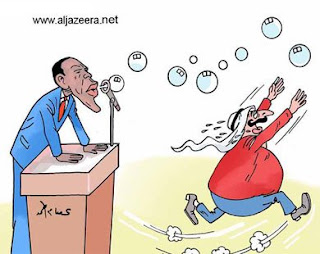 Great presidents make the political weather; yet Obama is hobbled by America’s recession

"If the year 2009 started with the promise of a new President coming to power in America, it is ending with the picture of just how limited is that power, not just for himself but for America as a whole.

The fractious end to the Copenhagen talks on climate change, the deepening impasse in the Middle East, the hesitant commitment of more troops to Afghanistan, the intensifying confrontation with Iran – it is hard to avoid the feeling that somehow a President who promised so much has been unable to break free of the past and that his moment is somehow now passing. The President who set out to be so different from his predecessor, George W Bush, is now being compared more and more to Bush Senior......"
Posted by Tony at 4:24 AM