Galloway slams Arabs for not organizing aid convoys to Gaza 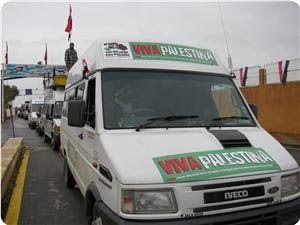 "DAMASCUS, (PIC)-- Upon his arrival at Damascus international airport, British lawmaker George Galloway, who is leading an aid convoy to the besieged Gaza Strip, expressed his dismay at the absence of the Arab role in organizing aid convoys to Gaza. “It is a shame that this convoy is coming from Europe and not from the Arab countries,” Galloway was quoted as saying.

He expressed his thanks to the Syrian authorities for facilitating the entry of Lifeline 3 convoy organized by the UK-based Viva Palestina movement, describing Syria as a fortress and the symbol of pride that never forsook Palestine.

In a press statement on Monday to the Palestinian information center (PIC), Galloway said that Lifeline 3 convoy is a message of solidarity with the Palestinian people in Gaza on the first anniversary of the Israeli war.

The British activist added that this convoy is aimed to direct the world’s attention on this anniversary to the war criminals in Israel on one hand and to the valiant Palestinian resistance on the other hand, expressing hope that Egypt would read the massage from this perspective. “We come in peace to Egypt to get safely to Palestine,” he underlined.

The activist also said that the growing pressures on the British government resulted in the arrest warrant against former Israeli foreign minister Tzipi Livni, noting the pro-Palestine pressure groups in Europe are working on tightening the noose on Israel.....

For its part, the Palestinian popular struggle front strongly denounced on Sunday Egypt for complying with the Zio-American dictates and tightening the siege on Gaza through building a steel wall on its borders in Rafah area......."
Posted by Tony at 9:02 AM