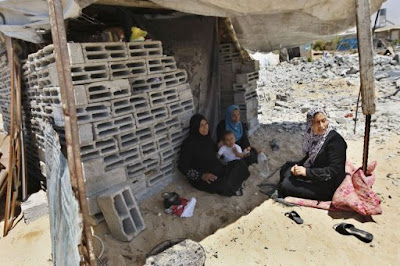 By Joseph Krauss (AFP)
(Via Uruknet)

"RAFAH, Gaza Strip — Huddled in a tent near the mound of rubble that used to be his home, Eissa al-Sidudi says out loud what many Gazans would only mutter in private: Hamas has gone too far.

On May 16 Hamas police dragged his wife and eight children out of their squat cement house and pummelled him with wooden batons as bulldozers razed the building along with nearly 20 other homes.

"They didn't come here as a government, they came as an enemy power," he said, surrounded by several nodding neighbours who are also camping out at the site, an outcrop of sand dunes on the edge of the town.

"Whoever destroys my house is my enemy," he said.

Hamas authorities said they demolished the homes under a court order because they were illegally built on government land.

But the image of Israeli bulldozers toppling homes in the occupied territories has been seared into the Palestinian conscience, and the move came amid rising discontent with Hamas's rule over the impoverished territory....."
Posted by Tony at 9:51 AM