Is it time for the west to engage with Hamas and Hezbollah? 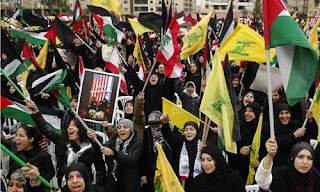 "Al-Jazeera, the Arabic satellite TV network, rarely shies away from controversy, so it was not surprising that one of the most interesting sessions at its annual forum in Doha this week was entitled: Engaging Resistance: Choice or Necessity?

Anyone who follows the Middle East knows that Resistance, with a capital R in English and the definite article in Arabic (al-Muqawama), is shorthand for two movements that operate at the heart of the region's toughest conflicts: Hezbollah in Lebanon and Hamas in Palestine.....

Osama Hamdan, in charge of Hamas's foreign relations, responded by urging the US to stop treating Israel as a strategic asset, stop relying on "agents" (Egypt, Jordan, and the Palestinian Authority) and to get over its aversion to dealing with Islamists. Ibrahim Moussawi of Hezbollah said given the choice between resistance and compromise, resistance was the obvious option. "When we face aggression," he said, "we have to defend ourselves."

Both proudly listed the achievements of their "asymmetric" struggle against Israel. Hezbollah is celebrating the 10th anniversary of its greatest victory ‑ Israel's withdrawal from Lebanon. Other landmarks include Ariel Sharon's unilateral "disengagement" from the Gaza Strip in 2005, the 2006 Lebanon war and last year's Cast Lead offensive, with all their human and material losses to a technologically superior enemy.

Both are implacably opposed to Fatah and the Palestinian Authority (PA), which first under Yasser Arafat and then Mahmoud Abbas abandoned armed struggle for negotiations, resistance for diplomacy. Negotiations have been going nowhere, slowly and sporadically, for 17 years while Israeli settlements in the West Bank have more than doubled...."
Posted by Tony at 3:55 AM