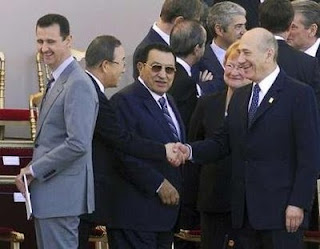 ".....He opened up the country for foreign banks, threw its doors wide open for imports, authorized private higher education and empowered the private sector.

But the lanky, former eye doctor who came to power 10 years ago this summer has not matched his liberal economic policies with any political reforms. None, in fact, and his powerful security services are in constant watch for criticism of the regime.

In the process, Assad has changed the Syrian regime's basis of legitimacy. He has depended less on his father's old anti-Israeli, Arab nationalism rhetoric, basing his power instead on promises of stability, modernization, economic openness and ending Syria's international isolation.

After 10 years of Assad's rule, the Damascus that once looked like a grim little place now smells of money, gripped by a consumer boom sustained by a clique of nouveau riche and businessmen living it up in what's essentially a "money talks" society.

Foreign tourists crowd the old city's storied bazaar, hotels boast full occupancy and trendy restaurants are so busy that advance booking is always recommended. The latest car models from Japan and Europe are a common sight on the city's congested streets and boutiques selling designer clothes seem to multiply.

Opening up a country economically while denying the populace democracy and freedoms is perhaps the Arab world's most popular formula of governance. Close U.S. allies Egypt, Tunisia and Jordan have been pioneers in the field.[Welcome to the field, Mr. Rabbit].....

Meanwhile, his family and its trusted associates keep a tight grip on the armed forces, security and intelligence. They and the new business clique that owes its deep pockets to the regime control the biggest and most lucrative businesses like mobile phone line providers and franchises for anything from cars to computers.....

Still, after a short-lived accommodation with opponents soon after coming to power in 2000, he has followed the same uncompromising intolerance for dissent....

Assad's feared security agencies also keep a close watch on everyone, carefully combing Internet postings for criticism.....Syrians say they are back to whispering again just as they were when they wanted to talk politics under the rule of the late Assad....."
Also, see this report: 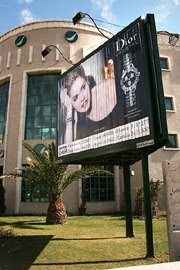 (Left: Expensive Western-style stores selling branded clothing and Swiss watches are becoming more numerous in Damascus. But for most Syrians they remain firmly out of reach; source: IRIN.)
Posted by Tony at 2:01 PM