Israel's "law of citizenship" will have dire consequences 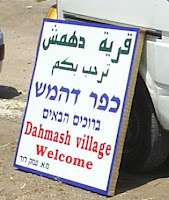 The definition of Israel as "Jewish and democratic" already means that the Palestinian minority are second-class citizens.

"....One of the reasons for the Palestinian rejection of this demand is the situation of the Palestinian minority in Israel (around 20 per cent). By coincidence, just two days before the cabinet vote, Human Rights Watch (HRW) issued a press release on the plight of Dahmash, an "unrecognised" Palestinian village 20km from Tel Aviv, sandwiched between Lod and Ramle. Here in microcosm is what Israel "as a Jewish state" has always meant for its Palestinian minority.
Dahmash has been inhabited since at least 1951, and its residents are Israeli citizens. Yet Israeli authorities "refuse to rezone the land as residential" -- despite doing so for land nearby -- and "refuse to provide basic services such as paved roads, sewage, health facilities, kindergartens, and schools". Moreover, "the authorities consider almost every one of the 70 houses 'illegal', and 13 are under threat of demolition".....
But it's not just a problem of land zoning for existing communities: as HRW describes, since 1948 "more than 900 Jewish villages and cities have been established in Israel, while the only new Arab towns allowed in 60 years have been seven towns that the government planned and constructed for Bedouin residents of the Negev". In a country that presents itself as the region's only democracy, the only new Arab towns in 60 years are half a dozen townships built as part of a "relocation" drive......"
Posted by Tony at 3:35 AM