'US not admitting its crimes in Iraq' 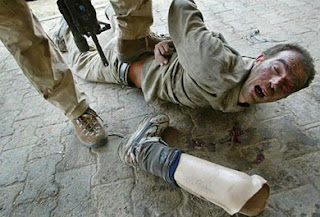 (Scroll Down for More New Posts)

It is interesting how little coverage this major story is getting in Iran and from Hizbullah; I wonder why?

In this interview, Press TV ignores the major portion of the leaked documents which deals with the torture and slaughter of tens of thousands by the Shiite death squads. Those squads were carrying out the ethnic cleansing by direct orders from Muqtada Sadr (based in Iran now) and the puppet Maliki, whom Iran is backing fully and twisting every one's arm to back him up.
The role of Iran's intelligence in arming and supervising their death squads in Iraq has also been documented in these leaks. Iranian commanders were with the thugs of Muqtada at check points and in the interrogation and torture centers.

Is this why Al-Manar is also ignoring this story completely, as if it happened on another planet?

Shame on you Al-Manar and shame on you Sayyed Nasrallah for endorsing sectarian war criminals such as Muqtada and Maliki. I had higher hopes and expectations from you, but this is what sectarianism is all about.
Tony Sayegh
"Copies of the documents allege that the US-led forces deliberately killed civilians, including pregnant women, at checkpoints.

The documents say excessive use of force was not routinely investigated and the guilty parties were rarely brought to account.

The files also show that over 66,000 civilians were killed between January 2004 and December 2009. That figure is much higher than previous estimates.

The Pentagon has already condemned the move by WikiLeaks.

Press TV has interviewed Senior Fellow with Peace Action Raed Jarrar in Washington to ask for his take on the issue......"
Posted by Tony at 4:08 PM