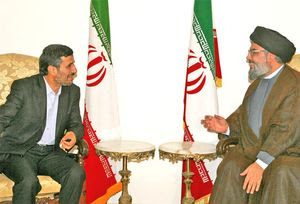 "....And the dark spectre of Iranian oil men drilling the Mediterranean seabed 70 miles north of the Israeli border is also illusory. French and Norwegian companies have done much of the drilling in Iran; the refining has been carried out by French and Italian companies. Now the Russians and Chinese are doing the same job in Iran. The idea that Tehran would furnish cash to pay Moscow and Peking to explore reserves off Lebanon is close to fantasy.

So why on earth did the Iranian Foreign Minister Manouchehr Mottaki and the Lebanese Energy Minister Gebran Bassil sit down to sign those 17 agreements a week ago? Herein lies a tale. For it just so happens that Mr Bassil is the son-in-law of the Christian Maronite ex-general Michel Aoun whose political party long ago aligned itself with Syria and Iran. In Lebanon, its Christian supporters have thus found themselves an ally of Hizbollah and in opposition to the majority government of the Prime Minister Saad Hariri.

On the surface, this makes sense. Aoun is helping the Iranians to move into the Lebanese economy. But right now, the ex-general has a few other things on his mind. For a start, three of the team of alleged spies for Israel arrested by the Lebanese army over the past nine months have turned out to be working for Aoun's party. And this "spy ring" is supposed to have been involved in amassing data within the Lebanese communications system. Indeed, one of them was a senior official in Lebanon's largest mobile telephone network...."
Posted by Tony at 4:55 AM