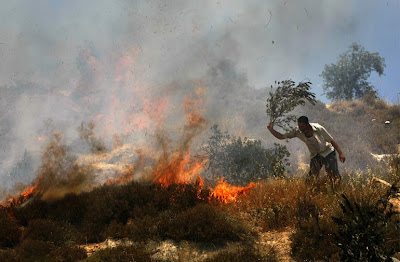 ""Lit from a blessed tree, an olive, neither of the east nor of the west, whose oil is well-nigh luminous, though fire scarce touched it … " -- Quran 24:35

"And when he had set the brands on fire, he let them go into the standing corn of the Philistines, and burnt up both the shocks, and also the standing corn, with the vineyards and olives." -- Judges 15:5
Olives and olive oil. Nothing symbolizes Palestinian land, identity and culture as they do. They are the hallmarks of national pride and the veritable heart of Palestine’s agricultural economy.

Although the subjugation and daily humiliation of occupation takes various forms in East Jerusalem and the West Bank—demeaning checkpoint searches; arrest and interrogation of minors; preventing ambulances from expeditiously transporting the sick to hospitals; the eviction of families and demolition of homes—few situations evoke more outrage and deep sadness as do the torching of olive orchards by vigilante settlers.

In a five-year study tracking 97 cases of Palestinian land vandalism, the Israeli human rights organization Yesh Din (Volunteers for Human Rights) found that police investigations did not yield a single indictment, with all cases closed due to of insufficient evidence or "unknown perpetrators." "The law enforcement authorities are not responding to the ongoing harm done to the livelihood of Palestinian families," said lead researcher Yior Lavne.
Savaging the cultural heritage and economic viability of a people is an odious practice. Under any other circumstance, the deliberate, purposeful desecration of land and sabotage of livelihoods would be considered a war crime. It is time the international community call what is happening in the West Bank just that.
Support Palestinian farmers through fair-trade purchase of their olive oil. "
Posted by Tony at 4:13 AM