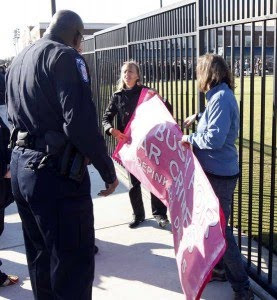 "While Arab and Muslim Americans representing CAIR, ADC, and the ATFP have praised George W. Bush for drawing a distinction between “Good and Bad” Muslims (See Photo in previous post below) even as he bombed Muslims in Afghanistan and Iraq, American voices of courage and conscience condemn him for his war crimes and call for his arrest. During a groundbreaking for Bush’s presidential center in Dallas this week protestors raise a “Bush for war crimes” banner and call for his arrest. Would Sarra Najjar-Wilson, Ziad Asali, Nihad Awad, or James Zogby ever join such a protest? Would they be willing to stand next to their fellow Americans in these pictures rather than posing for a photo with a US official or Zionist member of Congress? Or would that be too “radical” and “extreme” for them?"
Posted by Tony at 6:33 AM