What Is Israel’s Purpose from Ghajar Withdrawal? 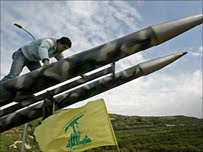 "20/11/2010 Sane person cannot believe that Israel will withdraw from the Village of Ghajar unconditionally, or for no reasons. At least there is a package of goals the Zionist entity is trying to achieve through this attempt....

In this context, many observers see Israel as using the village of Ghajar in order to present t self as internationally “responsible”, “sticking” to the United Nations’ resolutions and “fulfilling” its international commitments, while as Lebanon and especially Hezbollah is “violating” international laws.
Officials said that Israel is aiming to demand an official recognition from the UN that it is respecting the international laws. And this recognition surely will be in the face of "condemning" Hezbollah for its armament.

Observers can’t consider this Israeli “propaganda” as far away from the huge “scheme” aiming at targeting the defiant resistance in Lebanon. Israel and the west behind it have been hardly trying to target the resistance. They had waged a destroying war in July 2006 in order to “topple” Hezbollah. However, they haven’t succeeded. "
Posted by Tony at 4:02 AM