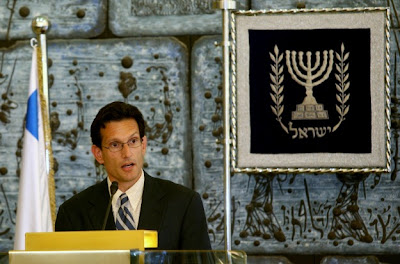 Incoming House Majority Leader tries to explain why he pledged allegiance to Israel's leader over the US President.

"......For now, forget Cantor's ridiculous assertion that the security of Israel and the United States are "reliant upon the other." No, the United States provides Israel with the security assistance to survive - it is not the other way around.
But lay that aside. It is Cantor's statement of loyalty to Netanyahu that is the shocker. Specifically, it is his promise that he would ensure that Republicans in the US House of Representatives "will serve as a check" on US Middle East policy.
Almost immediately, the Jewish Telegraphic Agency's bureau chief in Washington, Ron Kampeas, declared that Cantor's statement was "extraordinary".
He wrote that he could not "remember an opposition leader telling a foreign leader, in a personal meeting, that he would side, as a policy, with that leader against the President."
Kampeas was clearly shocked, but he was understating the enormity of Cantor's offense..... "
Posted by Tony at 3:34 AM