Have (infinite) war, will travel 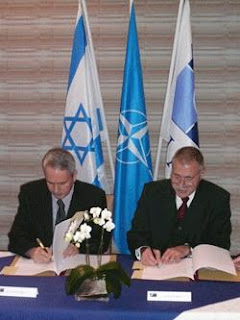 "It's got night ops, air strikes, drone missions and special-forces skullduggery. It's horrendously expensive, as bloody as a slasher film and it keeps the United States and the North Atlantic Treaty Organization busy in the strategic heartland of the world. Withdraw from Afghanistan? The fun is just getting started....

But for the Pentagon/NATO axis, Pakistan is just a drop in the ocean. Next Friday and Saturday, at the Lisbon summit, the world will be presented with a NATO-goes-global narrative. Team Pentagon/NATO will be convinced to abandon its privileged outpost of infinite war - Afghanistan - over its dead nuclear bombs. After all, Washington/Brussels has implanted a precious foothold in the heart of Eurasia - arguably for life.

The Lisbon summit, moreover, will see NATO formally adopting a new strategic concept - which essentially means keeping its nuclear arsenal in perpetuity, including US nuclear bombs stationed in Europe. You know, those nuclear bombs that Iran does not have (but Pakistan and India, not to mention Israel, do)....."
Posted by Tony at 6:38 AM