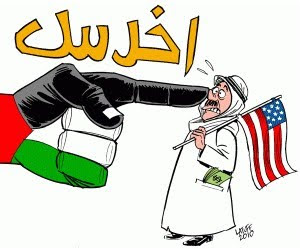 By Ikhras.com
"The American Task Force on Palestine (ATFP), the Washington public relations firm for the Israeli-sponsored, Western-funded, and American-supervised Palestinian Authority (PA) in occupied Ramallah, “strongly criticized” plans by the Zionist entity to expand, illegal, Jewish-only colonies in occupied “East Jerusalem”, and elsewhere in the occupied West Bank.
The plans were announced by anti-Arab racist Benjamin Netanyahu, the current head of the Israeli regime. Netanyahu is the son of a Polish Zionist father who was the secretary of the Russian Zionist, Vladimir Yevgenyevich Zhabotinsky (later known as Ze’ev Jabotinsky), a terrorist and founder of Revisionist Zionism. Netanyahu’s brother served as a member of an Israeli Death Squad specializing in extrajudicial assassinations which was dispatched by the then head of Israel, the Ukrainian Golda Mabovitch (better known as Golda Meir), to murder Palestinian intellectuals, activists and resistance leaders in the 1970’s. He participated in the attack that killed Kamal Adwan, Kamal Nasser, and Mouhamed Yousif Al-Najjar.
Ziad Asali is urging the Obama Administration “to act firmly to prevent these plans from proceeding”, and help “preserve the integrity of the two-state solution.” The empty-black-tie-tuxedo is now busy explaining America’s national interest to US officials and the Foreign Policy establishment, and why it’s in their national interest to listen to him. Hussein Ibish, the Washington concierge to PA officials, will likely respond by doubling his efforts to reach out to The Israel Project, AIPAC, and other racist Zionist organizations in order to “continue exploring any potential area for cooperation towards peace.” He has not ruled out another dinner with the Israeli ambassador....."
Posted by Tony at 7:20 AM