CAIR Finally Off The Hook 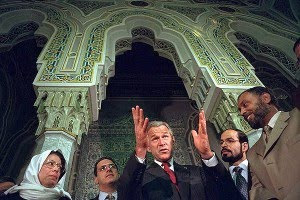 "A collective sigh of relief could be heard around Council of American Islamic Relation’s (CAIR) offices this morning. CAIR proclaimed it “welcomed an anti-terror statement by Saudi Arabia’s top religious leader made in a sermon at the peak of the Hajj, the most important event on Islam’s spiritual calendar.” The misogynist Sheikh Abdul-Aziz Al-Sheikh “called for religious moderation and said Islam prohibits terrorism, extremism and injustice.” CAIR’s Nihad Awad professed that “This statement from Islam’s spiritual capital should put to rest once and for all the false claim that Muslim leaders do not condemn terrorism.”
Awad appears to believe the oppression of Muslims, women, and foreign laborers within the Arabian Peninsula by the Saudi regime, and its peace overtures to the Zionist entity should be ignored because the Saudi regime is the American-approved representative of the Arab and Muslim worlds....."
Posted by Tony at 4:39 AM