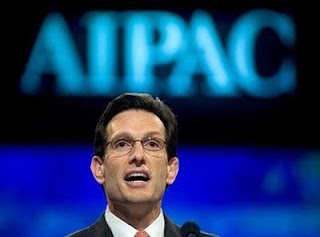 "Even the United States Congress’ most rabid pro-Israel supporters have not dared propose what incoming House Majority Leader Rep. Eric Cantor (R-VA) has.
Cantor told the Jewish Telegraph Agency (JTA) that he wants to see Israel’s massive three billion dollar annual stipend—the largest of any U.S. aid recipient—reclassified and not considered “foreign” aid. Its enormous subsidy would no longer be the purview of the State Department, but the Pentagon. If he had his way, Israel would be directly funded by the U.S. military......
It is only natural to speculate where Cantor’s loyalty lies. Readers are left to draw their own conclusion. What is clear, however, is that Cantor has crossed the line, and more than once. Unlike Israel, he must not be given a free pass. "
Posted by Tony at 8:55 AM