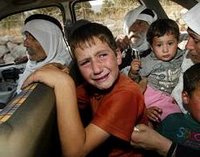 ".....Any act of collective punishment — whether ethnic cleansing or genocide or any other — is often preceded and or adjoined by a racist discourse that dehumanizes the victim and justifies the crime on baseless grounds, a concoction of lies and fibs that may appeal to national or religious psyches, but fails the test of law, morality or basic human norms and expectations.

Without such discourse, which depicted the original inhabitants of Palestine as cancerous, subhuman and a nuisance in the face of civilization and progress — as defined by the founders of the Zionist movement — it would not have been possible to carry out a systematic campaign of murder and ethnic cleansing in 1947-48, which saw the killing of an estimated 13,000 Palestinians, the forcible eviction of 850,000 and the depopulation and subsequent destruction of nearly 500 villages and localities. Without such a racist discourse it would have been difficult, to say the least, to carry out scores of preempted massacres, including Deir Yassin, Tantoura, Abbasiyya, Beit Daras, Bir Al-Saba’, Haifa and so forth.

Were it not for a decided campaign of institutionalized racism that occurred on such a large scale and which is maintained until today, it would have been impossible and implausible to gun down scores of innocent people after lining them up against the crumbling wall of the old Tantura mosque in May of 1948, or to bulldoze the home of a crippled man in Jenin in April 2002 without giving his mother the chance to evacuate him. Or to describe as a “great success” the killing of 14 civilians, including children when a one-ton Israeli bomb slammed into their apartment building in the Zeitun neighborhood in Gaza in July 2002. Or the wanton murder of 19 people, most of them women and children of the same extended family in Beit Hanoun earlier this November. But according to Israeli officials, every other method has been tried, and failed. “With murderous, bloodthirsty terrorism that wants to wipe you off the map, you have to respond accordingly: Wipe it out,” as Ben Caspit commented following the brutal massacre of Beit Hanoun.

Ethnic cleansing is indeed back on the Israeli political agenda, as Avigdor Lieberman, an Israeli politician who has for long advocated the ethnic cleansing of the Arab inhabitants of Palestine, was recently appointed as Israel’s new deputy prime minister. One of his early ideas since the new post, aside from sending Palestinians packing, was the killing of the entire leadership of the elected Palestinian government. “They...have to disappear, to go to paradise, all of them, and there can’t be any compromise,” he told Israeli radio last week.

The unfortunate reality is that Israel’s campaign of ethnic cleansing, though it might have changed tactics and pace throughout the years, has never stopped and is now more active than it has been for decades. It’s also clear that the adjacent racist discourse that made such a policy sustainable for six decades is also at work, making advocates of war crimes heroes in the eyes of most Israelis.

Moreover, amid unabashed American backing of such policies and almost total silence or helplessness of the international community, Israel knows that the success of its colonial project in the West Bank is dependent on the element of time.

What’s even more disheartening is the fact that Palestinian infighting is distracting and wasting energies that should be put to work to provoke and sustain an international campaign against Israeli atrocities. Infighting over governments that have no sovereignty, the lacking of any national cohesion or consensus or a clear political program that unifies Palestinians at home and in diaspora around one political and national agenda, will certainly ensure the success of the Israeli program and further contribute to the racist discourse that sees Palestinians as incapable of taking on the task of leadership and self-determination. "
Posted by Tony at 11:38 AM