Tearing Down the Ghetto Walls 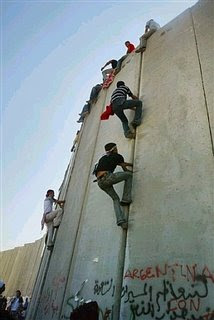 Yesterday I listened to Dr. Mona El-Farra from Gaza speak in person about the abysmal human conditions in the Gaza Strip as a result of the genocidal total blockade which has been in effect for more than a year now. This blockade is entering a more intensified and dangerous phase, since in addition to USrael, the EU, most Arab regimes and in particular Egypt, the Palestinian Karzai is now aggressively urging the continued closure of the Rafah crossing which is the only outlet the Gaza Strip has left to the outside world.

Listening to Dr. El-Farra's words and watching her slides, you quickly realize that you are watching a holocaust unfolding in front of our eyes. This is no exaggeration, and the holocaust analogy has been used by many authors including Jewish authors such as Professor Richard Falk, Professor Emeritus of International Law and Practice at Princeton University. As Professor Falk put it in a recent piece, titled "Slouching toward a Palestinian holocaust", "The recent developments in Gaza are especially disturbing because they express so vividly a deliberate intention on the part of Israel and its allies to subject an entire human community to life-endangering conditions of utmost cruelty. The suggestion that this pattern of conduct is a holocaust-in-the-making represents a rather desperate appeal to the governments of the world and to international public opinion to act urgently to prevent these current genocidal tendencies from culminating in a collective tragedy. If ever the ethos of 'a responsibility to protect,' recently adopted by the UN Security Council as the basis of 'humanitarian intervention' is applicable, it would be to act now to start protecting the people of Gaza from further pain and suffering."

As a small illustration of the unfolding genocide consider that 28 Palestinians from the more than 6,000 stranded on the Egyptian side of the ghetto wall, constructed by Egypt to seal the Gaza Strip in compliance with Israeli demands, have died since June 1. These are people stranded in the cruelest conditions in the desert heat with no money, food or shelter. Many of them are sick and dying and yet the quisling Egyptian government refuses to allow them to go through Rafah crossing to return to their homes in Gaza. Ridiculous technicalities are cited such as prior agreements about the presence of EU observers at the crossing, Israeli objections to opening the crossing, etc. But what is clear is that there is a total conspiracy to starve to death the Palestinians in the Gaza Strip.

When people watch films of Jews, with their emaciated bodies, being loaded on rail cars to be taken to concentration camps to be gassed, the question always arises: how did the Germans, knowing what was going to happen to these people, stay silent? This is the same question I ask today about what is going on right now in Gaza: how can the entire world, the UN included, not only watch but actually take part in this intended holocaust?

This has become standard operating procedure in the USraeli manual to decimate entire societies and peoples in the Arab world that dare to resist the Empire. We saw it applied ruthlessly in Iraq during the "sanctions" years. We all heard Madeleine Albright state that even though those sanctions caused the death of over 500,000 Iraqi children, the results from the American perspective were, "worth it." The total siege of Iraq caused the direct death of well over a million Iraqis in the prelude to the bigger Iraqi genocide still unfolding.

Iraq is the model for what the Palestinians in the Gaza Strip should expect. Again the lesson is clear: this is the fate of those daring to resist the Empire. Just as the Iraqis have their stooges hiding in the Green Zone in Baghdad, the Palestinians now have their stooges, fully engaged in the starvation of their own people, hiding in the Green Zone in Ramallah.

About a year ago the Palestinians discovered the power of unarmed, civil collective action. Israel was calling various people in Gaza to warn them a few minutes in advance that their homes were selected to be destroyed by Israeli missiles and that they had to vacate their homes immediately. This practice continued until the people came up with an idea to resist this atrocity. As soon as a home owner got such a call from the IOF, calls went out to neighbors and to supporters. Crowds gathered in and around the house and in many cases on the roof of the house. The message was that if the IOF was going to destroy the house then it had to kill scores of civilians. This collective resistance worked in more than one occasion.

This success should inspire the Palestinians in Gaza to come up with peaceful, creative mass-action ways to break the siege. An example comes to mind; it involves breaking the naval siege imposed by the Israeli navy on the Gaza coast. Volunteers from the group Women in Black will attempt to sail to Gaza in sailboats. They realize that the Israeli navy will prevent them from proceeding, but the objective is to expose the myth that Israel tries to perpetrate that it no longer occupies or controls Gaza. Please visit their website freegaza.org and give them some support if you can.

A similar action is needed to break through the ugly ghetto wall which Egypt (with Israeli orders) shamelessly erected along Egypt’s border with Gaza. If Egypt is supposedly a sovereign country, then it is not up to Israel to dictate the nature of the border between Gaza and Egypt. The Rafah crossing should be under the exclusive jurisdiction of the Palestinians in Gaza and the Egyptians. That crossing should be open all the time without any interference by Israel or its proxies. Anything less than a full opening of the crossing should be called for what it is: aiding and abetting an ongoing genocide and a holocaust and is a war crime. Those participating should be tried for a war crime.
Posted by Tony at 11:20 AM