This Genocide Will Not Be Televised: Red Cross finds starving children with 12 corpses in Gaza 'house of horrors' 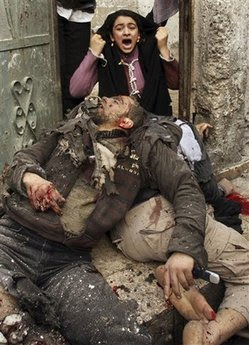 "The International Committee of the Red Cross has accused the Israeli military of "unacceptable" conduct and breaching international humanitarian law after discovering four emaciated children living next to the corpses of their mothers and other adults in bomb-shattered houses in Gaza City.

The ICRC said that it had spent four days seeking Israeli guarantees of safe passage so that it could gain access to the houses in the badly damaged Zaytun neighbourhood of the city. It was finally allowed to send in a rescue team and four Palestine Red Crescent Society ambulances yesterday afternoon and said today that what they found was shocking.

In one house they discovered four small children, alive but too weak to stand, next to the bodies of their dead mothers. In all their were 12 dead bodies lying on mattresses.

In another house they found 15 survivors of the Israeli bombardment, several of them wounded, and in a third, three corpses. At that point they were ordered to leave by Israeli soldiers manning a post some 80 metres away, but they refused to do so........"
Posted by Tony at 1:55 PM