Too much to mourn in Gaza 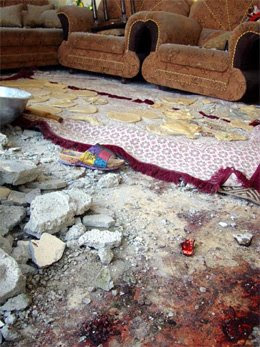 The Deeb family was preparing bread when they were killed in their home by Israeli shelling.

Eva Bartlett writing from the occupied Gaza Strip, Live from Palestine, 8 January 2009
(Eva Bartlett is a Canadian human rights advocate and freelancer who spent eight months in 2007 living in West Bank communities and four months in Cairo and at the Rafah crossing. She is currently based in the Gaza Strip after having arrived with the 3rd Free Gaza Movement boat in November. She has been working with the International Solidarity Movement in Gaza, accompanying ambulances while witnessing and documenting the ongoing Israeli air strikes and ground invasion of the Gaza Strip)

"After finishing a shift with the Palestine Red Crescent Society yesterday morning, we went to the United Nations-administered al-Fakhoura school in Jabaliya, which was bombed by Israeli forces, killing at least 40 displaced people who were taking shelter there. When we arrived, prayers were happening in the street in front of the school. I'd seen prayers in open, outdoor places in Palestine and Egypt. But these days, when I see a mass of people praying, in front of al-Shifa hospital, in the streets of Jabaliya, I think of the mosques that have been bombed, and of the loss of lives and sanctuaries. And yesterday I thought of the loss of another safe haven......"
Posted by Tony at 4:47 AM