The War Isn’t Over, But Israel Has Lost 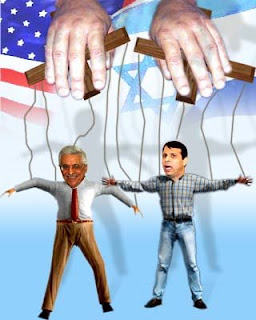 "I. The Last Waltz?
Repeating behaviors that have produced catastrophic failures and expecting a different result is insane; and when a person’s psychotic behavior puts himself and those around him in immediate physical danger, the responsibility of those who claim to be his friends is to restrain him. But even as Waltz With Bashir shows in multiplexes across the world as a grim reminder of the precedent for Israel’s brutal march of folly in Gaza, the U.S. (and the editors of the New York Times and Washington Post) insist that there is a sanity and rationality to sending one of the world’s most powerful armies into a giant refugee camp to rend the flesh and crush the bones of those who stand in its way — whether in defiance or by being unlucky enough to have been born of the wrong tribe and be huddling in the wrong place. By fighting its way to their citadel, they would have us believe, Israel can destroy Hamas and usher in a golden age of peace. Or, to borrow from the casual callousness of Condi Rice during the last such display of futile brutality, we are witnessing, again, the “birth pangs of a new Middle East.” Israel failed in 2006, just as in 2002 and 1982. This time, they tell us, will be different.........
Even as the realization begins to dawn that their adversary, once again, will emerge politically stronger from a military pummeling, the Israelis contemplate one last bloody foray into the heart of Gaza City, hoping that military action can weaken Hamas and force it to surrender to Israel’s terms. Some American policymakers even cling to the fantasy that they can reimpose the regime of the pliant Mahmoud Abbas on Gaza — a pathetic fantasy, to be sure, because close observers of Palestinian politics know that the only thing keeping Abbas in charge of the West Bank, right now, is the presence of the Israeli Defense Force, and it’s willingness to lock up his opponents. Conveniently, for example, Abbas doesn’t have to deal with his own legislature, which is dominated by Hamas, because Israel has locked up most of the legislators. Mahmoud Abbas has allowed himself to be turned into a Palestinian Petain, and even much of the rank and file of his own Fatah party has turned against him. Not even the Israelis believe he could control Gaza without them, and they are not inclined to stay........."
Posted by Tony at 7:07 AM