Another leftist wins in Latin America 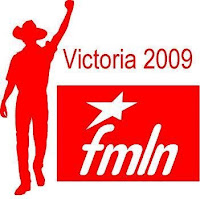 Funes from the Farabundo Marti National Liberation Front (FMLN) won 51.3% of the vote. "My party, the FMLN, has shown to the whole world it is ready for a new government," Funes was quoted as saying by Reuters in a victory speech.

Avila of the conservative Nationalist Republican Alliance (ARENA), which has ruled El Salvador since 1989, trailed with 48.7% support.

It was a historic victory after a bitter campaign that split the small Central American nation, where memories of the 1980-92 civil war that killed 75,000 people are still strong.

It is also a defeat for Washington after spending billions of dollars in supporting a string of right-wing governments in the fight against the FMLN during the civil war, although Funes insists he will look for good relations with the US. "
Posted by Tony at 3:14 AM