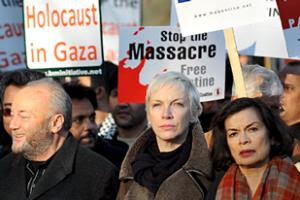 "21/03/2009 British lawmaker George Galloway has been blocked from visiting Canada because of his “support of Hamas movement,” which is banned in the country, the Canadian immigration minister's office said Friday.....

In a comment piece published in Britain's Guardian newspaper, Galloway described the ban as "absurd, hypocritical, and in vain" because his allies in the country were seeking a judicial review. "And there are other ways I can address those Canadians who wish to hear me," he wrote.

Galloway was to give a speech at a public forum, Resisting War from Gaza to Kandahar, in Toronto at the end of the month, but has been denied entry over his opposition to Canadian troops in Afghanistan, said Britain's Sun newspaper.

"From coast to coast, minister Kenney notwithstanding, I will be heard -- one way or another and all right thinking Canadians, whether they agree with me over the wisdom of sending troops to Afghanistan or not, will oppose this outrageous decision."

“This has further vindicated the anti-war movement’s contention that unjust wars abroad will end up consuming the very liberties that make us who we are. This may be a rather desperate election ploy by a conservative government reaching the end of line, or by a minister who has not cottoned on to the fact that the George Bush era is over.”......"
Posted by Tony at 8:12 AM