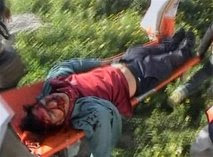 "RAMALLAH, Mar 19 (IPS) - The critical wounding of a U.S. activist has highlighted the excessive use of force by Israeli forces. The activist, Tristan Anderson, 38, was shot in the head by Israeli soldiers during a protest against Israel's separation barrier in the Palestinian West Bank last week. He remains in intensive care in Tel Hashomer Hospital in Tel Aviv.

Anderson was one of approximately 400 international, Palestinian and Israeli protestors taking part in a demonstration in the village of Ni'ilin, near the central West Bank city Ramallah, when he was hit by a teargas canister.

The teargas canister which hit Anderson is a new variety being used by the IDF, and is particularly lethal if fired directly at protestors. The gas canister can travel over 400 metres. It does not make a noise when fired, or emit a smoke tail, and has a propeller for mid-air acceleration. A combination of velocity and silence increases the danger it poses.

Witnesses gave testimonies to the media and to human rights organisations that they saw Israeli soldiers aiming at Anderson before they shot the canister from a distance of about 60 metres. It hit him directly on the forehead. The impact of the canister caused severe damage to the right eye, and Anderson has had to undergo critical brain surgery.

Israeli soldiers continued to fire teargas canisters towards the wounded man and the people surrounding him as he lay critically injured on the ground and Palestinian medics tried to give him first aid. Later, a Palestinian ambulance trying to rush Anderson to hospital was blocked at least five minutes by Israeli soldiers. Only after other foreigners engaged the soldiers in heated debate did they allow the ambulance to pass.

Anderson was then delayed another 15 minutes while an Israel ambulance was called, because Palestinian ambulances are not allowed to cross into Israeli territory without special permit........."
Posted by Tony at 6:31 AM