West Bank villagers pushed away from their valley 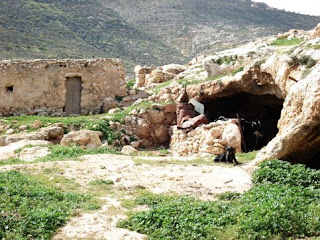 Dr. Marcy Newman, The Electronic Intifada, 17 March 2009
( Dr. Marcy Newman is Associate Professor of English at An Najah National University in Nablus, Palestine. Her writing may be found at bodyontheline.wordpress.com.)

"......To be sure, this latest phase in the ethnic cleansing of Aqraba is not unique to the West Bank nor to the part of historic Palestine that is now considered Israel. This week saw the destruction of two Palestinian homes and 100 olive trees in the Negev town of Beer Seba, now given the Hebraized name of Beersheva. In the West Bank, from Qalqiliya to Hebron to East Jerusalem, families await the status of the orders for their homes to be demolished. But while there is a great deal of attention paid to the impending destruction of Palestinian homes in East Jerusalem, there is little if any media attention or support for families in small villages like Aqraba. In the East Jerusalem neighborhood of Silwan, Palestinians flock to the demonstration tent set up to show solidarity, but there has been no such solidarity presence in Aqraba. Israel's colonial divide-and-rule policy continues to fragment the people in ways that separate them physically by its system of checkpoints and permits. But this is not about the occupation of the West Bank. Indeed, these same methods were used to confiscate large land tracts during the 1948 catastrophe. It is an ongoing Nakba that requires learning the lessons of history by not submitting to the divisions imposed by the colonial regime. "
Posted by Tony at 5:35 AM