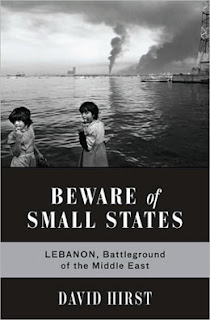 "Veteran Middle East correspondent David Hirst, author of the seminal work on the Palestinian plight The Gun and the Olive Branch, has a new release: Beware of Small States, an equally important book on Lebanon's complex tragedy. The Electronic Intifada contributor Robin Yassin-Kassab interviewed Hirst on his work and views.....

RYK: The "resistance front" of Hizballah-Syria-Iran seems to be threatening a unified response to any future Israeli attack outside historical Palestine. Is this a credible threat? Does the changing role of Turkey -- its economic and political alliance with Syria and Iran -- and the increasingly warm relationship between Russia and Syria, suggest the Middle East may be approaching a "balance of terror" to deter Israel from adventurism?

DH: There are increasing indications that the "next war" in the Middle East -- what I call the seventh -- may spread beyond Lebanon to embrace Hamas in Gaza, Syria and Iran. There is no formal military alliance between them, but Syria and Iran are clearly seeking to inculcate the fear that, if Israel does go to war against its likeliest, first target -- Hizballah -- they will join in on its side. They might be doing this for deterrent purposes only. Even so the mere hint of it increases the risk that, by accident or design, it will come to pass. Alternatively, of course, if Israel were to hazard a strike on Iran's nuclear sites, it is highly probable that Hizballah would retaliate with its now vastly replenished stock of missiles. And, this time, that could well escalate into the war with Syria which had failed to materialize in 2006 -- with Israel's so-called Second Lebanon War -- and earlier such conflagrations between it and Hizballah.

RYK: British journalist and author Robert Fisk says he is utterly pessimistic about the future of the Middle East. He sees it as an unfolding "hell disaster" with no light on the horizon. Are you equally gloomy?

DH: In my experience it has become a truism: things never get better in the Middle East, they just get steadily worse. I have been hearing that -- from Arabs of pretty much any condition or background -- since the 1967 Arab-Israeli war. I don't see any likely change in that reality, certainly not, at any rate, till the chief of the region's many maladies -- the Arab/Israel conflict -- finds a cure, or a convincing remission......"
Posted by Tony at 7:40 AM