Fourth of July: Put Away the Flags 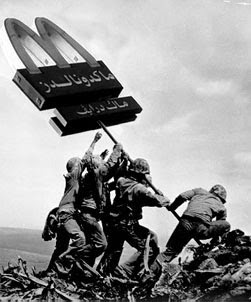 (Howard Zinn, a World War II bombardier, was the author of the best-selling "A People's History of the United States" (Perennial Classics, 2003, latest edition). This piece was distributed by the Progressive Media Project in 2006.)

"On this July 4, we would do well to renounce nationalism and all its symbols: its flags, its pledges of allegiance, its anthems, its insistence in song that God must single out America to be blessed.

Is not nationalism -- that devotion to a flag, an anthem, a boundary so fierce it engenders mass murder -- one of the great evils of our time, along with racism, along with religious hatred?

These ways of thinking -- cultivated, nurtured, indoctrinated from childhood on -- have been useful to those in power, and deadly for those out of power.

National spirit can be benign in a country that is small and lacking both in military power and a hunger for expansion (Switzerland, Norway, Costa Rica and many more). But in a nation like ours -- huge, possessing thousands of weapons of mass destruction -- what might have been harmless pride becomes an arrogant nationalism dangerous to others and to ourselves....

And nationalism is given a special virulence when it is said to be blessed by Providence. Today we have a president, invading two countries in four years, who announced on the campaign trail in 2004 that God speaks through him.

We need to refute the idea that our nation is different from, morally superior to, the other imperial powers of world history.

We need to assert our allegiance to the human race, and not to any one nation."
Posted by Tony at 5:05 AM