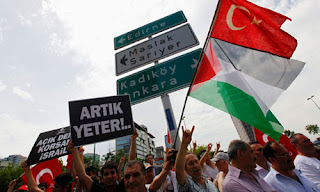 Ankara's improving ties with Tehran were also arousing mistrust in Washington, and the Turkish and Brazilian brokered uranium swap deal seemed to confirm the suspicions of those who felt the Turkish government was moving in a direction contrary to US interests. While Turkey may have been asserting its new role and trying to avoid a scenario it saw as destabilising to the entire region, it was not necessarily misunderstood. The Iranian-Brazilian initiative did run counter to US Republican and neo-conservative pressure to support a war or at least an Israeli military strike against Iran.

But two events became the catalyst for an all out campaign against the Turkish government in Washington: Turkey's suspension of military maneuvers with Israel, the recalling of its ambassador and demand for an international investigation in the wake of Israel's military interception of the Turkish aid ship; and Turkey's vote against a new round of sanctions on Iran at the United Nations Security Council.

The response was swift: A number of prominent Republican and Democrat congressmen slammed Turkey's "disgraceful conduct," warning that there would be "payback" if Ankara continued to pursue its close relations with Iran and hostility towards Israel.

In conclusion, when Obama visited Turkey in 2009 he declared: "We are not solely strategic partners, we are also model partners." No similar statement followed the Toronto meeting, but little has changed in terms of the two countries' mutual needs.

The US needs Turkish support troops in Afghanistan and to benefit from Turkey's influence the Black Sea region, the Caucuses and the Middle East. It also needs secure transport from Turkish ports during the eventual withdrawal of US troops from Iraq. Likewise, Turkey needs sustained US support in its battle against the PKK and its apparent splinter groups, which Ankara suspects are backed by Israel.

But the US needs to patch up the Turkish-Israeli rapture - partly to placate right wing pressures at home, but also because it is vital to US interests in the Middle East.

It is likely that Ankara will collaborate with Washington to stop any further deterioration in its relations with Israel, but may wait until a new government takes over to mend the rift.

And while the US cannot afford to bow to right wing pressure to drop its support for Turkey, it may still choose to support the AKP's rivals in the next elections - something US ambassador James Jeffrey's recent visit to Kemal Kilicdaroglu, the leader of Turkey's opposition Republican People's Party, may hint at."
Posted by Tony at 8:02 AM