Boycott, divestment and sanctions in Australia, five years on 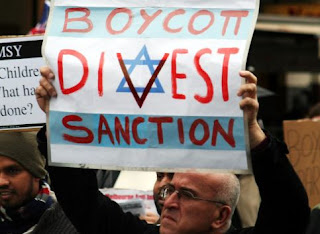 "It is five years since Palestinian civil society first made the call for a global boycott, divestment and sanctions movement against the apartheid state of Israel. At the time, introducing such action in Australia seemed impossible when the public barely knew anything about the Palestinian struggle for justice and freedom. Education had to be a priority if there was to be any overturning of the long-accepted and indulged Zionist narrative.....

Australia is still a long way off from the effective boycott strategies being implemented in the UK, Europe and the US, which includes an increasing number of divestments from Israeli companies by churches, municipal councils, colleges, unions, banks and pension funds and some countries are calling for sanctions on arms trade with Israel. Certainly, the Australian government is most unlikely to impose sanctions regardless of which political party takes over in the coming elections.

The power lies with activists, unionists and people of conscience to turn these first steps into a dynamic boycott movement much like what is already sweeping the world. The catastrophe facing the Palestinians demands that we give BDS our best shot, and indeed, history is on our side."
Posted by Tony at 8:04 AM