Down goes the wall 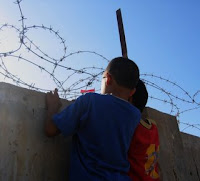 "Last night I received a text message from Fida-"its coming down-its coming down!" she declared ecstatically. "Laila! the Palestinians destroyed Rafah wall, all of it. All of it no part of it! Your sister Fida.".....

People often ask me why such things-meaning people powered civil protests that can overcome even the strongest occupation- don't happen sooner, or more often, or at all for that matter. We underestimate the power of occupation to destroy a people's will to live, let alone resist and and attempt to change the situation. This is the worst thing about occupation, whether a military occupation like Israel's, or a political one like Hosni Mubarak's in his own country. And it is only when you can overcome the psychological occupation, the occupation of the mind, that the military occupation in all its manifestations can be defeated."
Posted by Tony at 12:18 PM