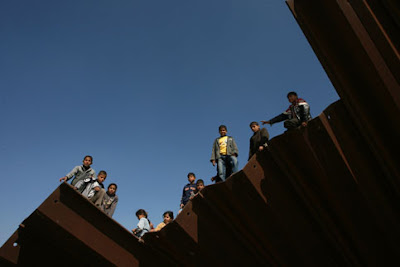 ".....The family was not alone; thousands of other Palestinians thronged nearby, on their way to al-Arish, following the blasting through of the Israeli-built steel walls by Palestinian resistance fighters earlier that day. Hundreds of thousands of Palestinians poured from Gaza into Egypt's Sinai peninsula, breathing a collective sigh of relief following a half-year of Israeli closure of all Gaza border crossings.

Those returning to Gaza carried everything from food to livestock. Other Gazans were carrying on their shoulders boxes of another precious commodity in besieged Gaza -- cigarettes -- the price of which has at least doubled over the past several months....."
Posted by Tony at 7:04 AM