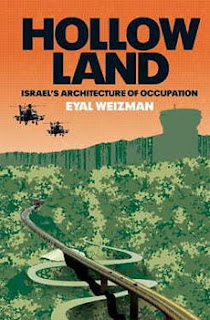 "......This architecture of occupation is thoroughly analyzed in the Israeli-born architect Eyal Weizman's Hollow Land. The study takes us to the heart of a conflict which has always been about land, where "the mundane elements of planning and architecture have become tactical tools and the means of dispossession." Behind the headlines, the reality on the ground (as well as above and beneath it) continues to be reshaped daily.

Many new arrivals and even resident Israelis are unable to see where Israel proper ends and where the occupation begins. This is especially true in occupied East Jerusalem, where the architecture of the annexed settlements has been used to "blur the facts of occupation." It is also true for other settlement blocs that often serve as commuter towns for cities such as Tel Aviv.

Much of the occupation's architecture is a message to the Palestinians. Once, viewing the West Bank colonies, Ariel Sharon remarked that "Arabs should see Jewish lights every night from 500 meters." Indeed, from Bethlehem's restaurants, the view is of the ever-expanding Har Homa settlement, while Palestinian farmers across the West Bank look up from their valleys at the red-roofed houses on the hilltops above.

One of the photographs in Hollow Land is especially striking. At the Allenby Bridge crossing between Jordan and the West Bank, Palestinians wait in line for their papers to be checked by Palestinian Authority policemen. Behind a two-way mirror, however, Israeli agents are at work, vetting every traveler. With this sovereignty charade central to the Oslo peace process, occupation infrastructure replaced "the necessity for the physical presence of Israeli forces within Palestinian cities." Israel can appear to be ceding territory generously while "still dominating the Palestinians physically, collectively and politically by remotely controlling their movements."......."
Posted by Tony at 2:46 AM